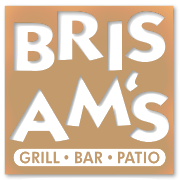 Steve Buchanan, owner of Brisam’s Grill, Bar and Patio, located in Cave Creek, Arizona was raised just north of Milwaukee WI. From an early age, Steve knew he wanted to be in the restaurant business, because of his love of cooking, then and now. And we think you’ll agree, when you experience one of their tasty Pizza’s, juicy hamburgers, pasta and daily specials at Brisam’s.

Steve worked for a number of small companies, in his early culinary career. “This is where I really learned the biz,” Steve remembered.

Fast forward to 1992 and the opening of the Mall of America. The company Steve worked for opened five concept restaurants in the mall. One establishment was a night club called “Gators”. If you have ever seen the TV. show “Bar Rescue,” then you know Jon Taffer, who was an investor in the club (great guy)! Gators was Night Club of the Year in 1993. And because of this prestigious award, Steve was flown to Las Vegas, to accept the award. Steve joined Jon Taffer on-stage for a talk on running successful hospitality businesses.

Steve left Minnesota and moved to Mississippi. He was there helping launch a new facility in the Grand Casino in Gulfport Mississippi. Fun times where had, as Steve learned more about managing and running successful restaurants and bars.

Opportunity knocks. Steve was offered managerial employment with Rock Bottom Restaurant and Brewery in downtown Chicago. After just a year, Steve was promoted to Regional Manager and over saw 8 restaurant around the country.

Rock Bottom moved Steve to sunny Phoenix in 2002. Steve found himself living at The Point Tapatio for 4 years before moving up to Cave Creek in 2006. In 2007 Steve bought Brisam’s and  has never looked back.  Steve commented, “I have been blessed with the BEST staff I have ever worked with in my hospitality career!! Eleven years later, I still have a lot of the same great employees working with me. They’re making Brisam’s better every day”

SPECIAL AWARD   FROM THE LITLE OWL IN THE SUIT

TRIP ADVISOR AWARDS BRISAM’S WITH A CERTIFICATE OF EXCELLENCE